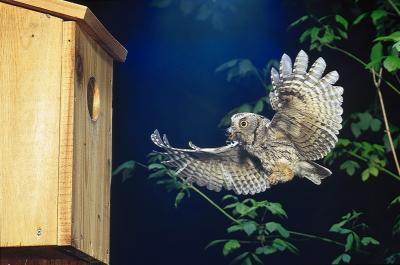 Most Eastern Screech-Owls are browner than their cousin, the Western who is gray to brown in color. The best way to distinguish Eastern from Western Screech-Owl is by sound. Eastern Screech-Owls have a descending whinny that sounds like that of a horse, as well as, a long, whistled trill of one pitch. Western Screech-Owls give an accelerating series of short whistle, like a ball bouncing as it comes to rest. It is a favorite of many bird lovers on warm summer nights. Neither species screeches, but both bark and chuckle.

Screech-Owls adapt well to human habitats. Both species can be found in open woodlands, including urban parks and backyards. They eat small rodents, moths, bats, fish, and small songbirds.

Both species are about as tall as a robin, but stocky with no neck and ear tufts. Regardless of color, they camouflage well into their surroundings. Screech-owls sometimes perch at the entrance of their roost holes during the day, but they are nearly invisible by pressing their head and body feathers against the tree to blend in.

If you have a lot of trees in your neighborhood, you may already have a screech-owl. The Screech-Owl nests in cavities and takes readily to a birdhouse. They have one brood a year and four to six young, and they are not generally migratory, preferring to be year-round residents. Happy Bird Feeding!

(Kathy and her husband, John, own and operate the Wild Birds Unlimited, located at 111 S. 24th Street. Billings and at www.wbu.com/billings.)